Victoria Pest Control just returned from the 2012 North American Bed Bug Summit – Bed Bug University, in Las Vegas, hosted by Bed Bug Central. It was an amazing experience and the conference was full of presenters from around the world, offering some the latest research into bed bug behaviour, control strategies, and the clinical relevance of bed bugs on human health. Here are some interesting highlights of the conference, as well as a photo of the president of Victoria Pest Control, Daniel Pratap, with Dr. Dini Miller, of Virginia Tech University! She is a rock star in the bed bug world!! 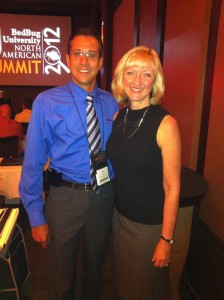 For further information about bed bugs, or any other pest, feel free to contact us… We really like bugs! But we like getting rid of them even more!!!

Cheers, and thank you for reading!