There are two common types of carpenter ant in B.C. The first, Camponotus modoc is a large black ant while the other is the Camponotus vicinus, a black ant with a reddish middle section. Both species vary in size, ranging in size from 4 mm to 12 mm long, and vary in colour. Two distinguishing features of the carpenter ant are that the worker ant has a bump between the middle section and the abdomen, and that the middle section is rounded when viewed on the side. Carpenter ant activity is often first noticed in late winter or early spring, as workers begin foraging for food. If a mature nest is present, a large number of winged reproductive (Alates) ants may be seen emerging into the home or building.

Victoria Pest Control has extensive experience in providing carpenter ant treatments in the Greater Victoria Area. the Greater Victoria Area. Managing and eliminating Carpenter Ants in structures requires extensive knowledge of both the behaviour and biology of the ant, and the structural elements involved. Carpenter ant activity is often first noticed in late winter or early spring, as workers begin foraging for food. If a mature nest is present, a large number of winged reproductive (Alates) ants may be seen emerging into the home or building. Victoria Pest Control has been eliminating and managing Carpenter Ants in homes and businesses since 1986, and has the knowledge and experience to create a successful treatment program to suit your needs. Call or email us at 250-477-0322 or info@victoriapestcontrol.com 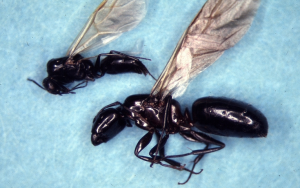 The first step in any successful ant management program is to correctly identify the species involved. While we have many species of Carpenter Ants in BC, two of them are of significant structural concern along the south coast.

Description: Large, black head, black thorax, black abdomen, reddish legs, varied worker size (polymorphic). When viewed from the side (dorsal profile) the thorax is evenly rounded and smooth, and there is one node separating the thorax and abdomen.
Nest Size: Up to 50, 000
Monogyne: One queen per colony, located in parent nest. Can live for up to 25 years.
Colony Spatial Structure: Primarily polydomous, or multiple nest sites per colony. Parent colonies are often located in live or dead trees, tree stumps, wood piles, or landscape timbers. The queen, eggs, and early instar larvae are present in the parent colony. Numerous satellite colonies are constructed, where workers, later stage larvae and pupae are transported to for development. Rarely are parent colonies founded inside structures, as they require specific conditions for egg development. Rather, satellite colonies are common inside homes and other structures, where it is not uncommon to find multiple satellite nests, and potentially multiple nests from more than one colony. Satellite colonies can be constructed over 100 feet from the parent colony. C. modoc satellite nests do not contain functional queens, larvae and pupae are transported from the parent colony into the satellite nests. C. modoc has the potential to cause significant structural damage. 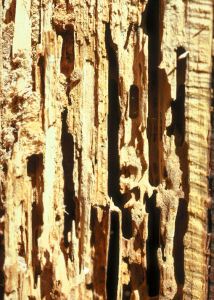 Description: Large, black head, red thorax, black abdomen, varied worker size (polymorphic). When viewed from the side (dorsal profile) the thorax is evenly rounded and smooth, and there is one node separating the thorax and abdomen.
Nest Size: Up to 100, 000
Polygyne: Multiple functioning queens per colony.
Colony Spatial Structure: Polydomous, or multiple nest sites per colony. C. vicinus colonies can become extremely large, and contain multiple queens, up to 40 in the parent colony. Like C. modoc, C. vicinus can construct multiple satellite nests, where mature larva, and pupa are transported to for development. Parent colonies are most often located outdoors, and satellite colonies are often found in insulated areas of crawlspaces, wall voids, attics, etc. While structural damage can still occur from C. vicinus, satellite nests are often found only in insulation. However, it is very common to find multiple nests, and have a very large number of ants infesting a structure and the surrounding areas.

Reducing moisture and rotten wood in and around the home is a necessary step in reducing carpenter ant activity. Remove or repair damaged areas of the structure, including: rotting wood, leaking roofs, blocked gutters, rotting decks, inadequate ventilation in attics and crawlspaces, leaking plumbing, soil contact with wood parts of the structure, old firewood, rotting fence posts and landscaping wood, rotting trees. Vegetation should not be touching the structure and should be trimmed away from the building. Soil lines should be reduced 4-6 inches below siding, exposing the foundation. If you discover an ant problem, call us for carpenter ant treatments in Victoria.

The modoc species is typically found throughout B.C. and the vicinus species is found in drier areas. The carpenter ant will chew through wood and create smooth tunnels, or galleries, which run with the grain of the wood. It does not eat the wood, and it seeks out damaged and decaying wood, and also other building materials such as foam insulation. The ant will forage for food at night along trails and through gaps in the structure. An ant colony will typically number 10,000 to 20,000, and will start swarming after 3 to 6 years.

The winged female ant or queen will nest and lay eggs which will become wingless worker ants, and the worker ants will take care of foraging, tunneling and caring for the new larvae. Carpenter ants will also create satellite nests in the structure or outdoors. Indicators of carpenter ant activity in the home are: sawdust falling out of cracks and crevices in the wall, and around electrical boxes; sawdust piles and ant wings and other insect parts in attics; rustling noises in the wall; foraging trails indoors; presence of a large number of ants indoors between January and April.

Carpenter ant control requires a comprehensive and integrated approach. Consult a pest control professional to arrange for an estimate.