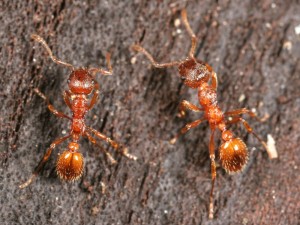 The European Fire Ant, Myrmica rubra, has been confirmed in the Greater Victoria Area!!! This ant is capable of inflicting painful stings, similar to a wasp, and can cause allergic reactions in sensitive individuals. If you suspect that you have come into contact with this ant, please call us!

About the European Fire Ant

The Common Red Ant (Myrmica rubra) ranges throughout Europe as well as Japan and North America as an invasive species. It is thought to originate from Central Europe and was first discovered in the USA in Massachusetts in 1908 by Wheeler. The species was first described by Carl Linnaeus in 1758.

Workers reach up to 5 mm in length and have a two-segmented “waist”. The head and the mesosoma are heavily sculpted but the abdomen is smooth and shiny. The entire body of the worker caste is covered with fine “hairs”. Workers have 12- segmented antennae, with a four-segmented club and a bent scape.

Myrmica ants can be distinguished due to the propodeum having two spines pointing backwards.

Myrmica rubra is a polygynous species often having many queens in a single colony. They are also polydomous, often having multiple nest sites per colony. Nuptial flights typically take place in late July to mid- September in Europe. Hundreds of young queens and males take to the air to mate and Queens will gather together after their nuptial flight and will found nests together. Myrmica rubra queens have been known to live up to fifteen years.

Myrmica rubra is regarded as a fairly aggressive species, capable of delivering a nettle-like sting to vertebrates and invertebrates alike. When handling this species you are much more likely to be stung when it is hot than when it is cool.

M. rubra lives primarily on a diet of honeydew excreted by aphids but are also predatory toward many small invertebrates.